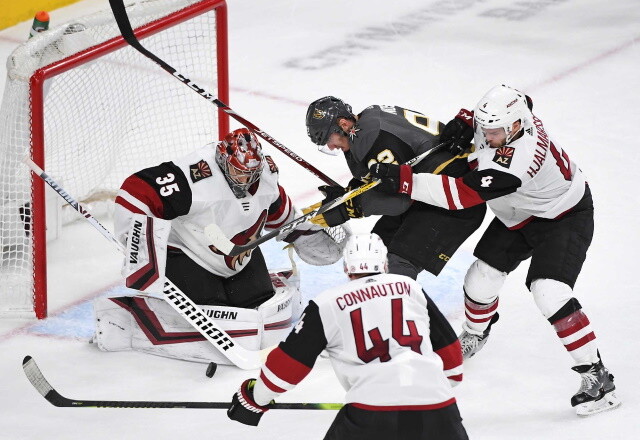 Who the Vegas Golden Knights Should Avoid

Tom Callahan of Vegas Hockey Now:  There are some players the Vegas Golden Knights should not acquire come Monday.

Taylor Hall: Hall should have a warning label at this point. He is a perimeter player now more than ever. Is that because of the knee? Is that the fear of being injured again? Whatever it is, Hall is not the same player from a few seasons ago.

Phil Kessel: Kessel may not be available anyway but his inability to mesh well with talent at times should be noted. He may be better off where he is in Arizona.

Patrik Laine: Laine is a shell of his former self at this juncture. His tenure in Columbus just makes him someone not to target even if it is not all his fault.

Mattias Ekholm: As tempting as this is, Vegas has a solid group defensively. Plus, the cost to acquire Ekholm would have been too much anyway. Add in that Nashville is not selling and it’s just as well.

A few more targets to avoid if one is Vegas…

Tom Callahan of Vegas Hockey NOW:  For a few players more to avoid…

Mike Hoffman: Simply, Hoffman and playing defense do not mix. The power-play specialist is what he is. Even Florida moved on quickly from Hoffman and he did have to wait to sign with St. Louis. The fact that he has been so up and down this year is another sign to look elsewhere.

Niklas Hjalmarsson: The Arizona defenseman has aged. His health from playing so many “hard years” has taken a huge hit. Vegas already has an Alec Martinez. An older version is not worth any price.

Ryan Dzingel: Dzingel has speed and has a little bit of finishing ability. The problem is there are players like that in Vegas already. He brings little edge to his game and plays a bit too much on the perimeter. Simply, he is another player to avoid.