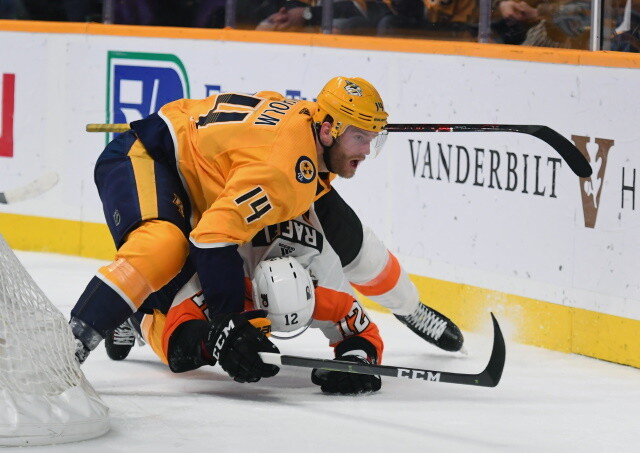 The Flyers should move their first-round pick

Ryan Gilbert of Philadelphia Hockey Now: The Philadelphia Flyers hold the No. 13 pick in the 2021 NHL draft. The Flyers weren’t able to address their needs offseason last year. Will they be able to do so this offseason?

The Flyers are in win-now mode and they should be looking to trade their first-round pick. They need a top-four defenseman and it doesn’t have to be a top pairing guy. The free agent may not have want they need, so GM Chuck Fletcher will need to go the trade route.

During this past season, there was speculation that the Flyers and Nashville Predators held some trade talks potentially involving defensemen Mattias Ekholm and Ryan Ellis.

The Predators likely won’t be the only team considering moving a defenseman. The Columbus Blue Jackets have Seth Jones and the Flyers should at least see what the asking price is.

Blues should have some trade options this offseason

“This will be an active year, not only in St. Louis but around the league.” Any time you have expansion you have teams do what’s best for them, whether it’s not exposing players to Seattle or making trades where they feel they’re in a better spot than just giving Seattle a list of players.”

Jack Eichel is growing tired of losing in Buffalo. If they do move him, they’ll need to get back offense. The New York Rangers are in a good position and looking to buy.

Changes could be coming in Calgary. Teams may eye Matthew Tkachuk and Flames would likely prefer to move Johnny Gaudreau or Sean Monahan.

The Columbus Blue Jackets may be looking for a new home for defenseman Seth Jones. The cost to acquire and for an extension is going to be high. The Chicago Blackhawks, Los Angeles Kings, Florida Panthers and Toronto Maple Leafs are more likely destinations than St. Louis.

The trade market for Vladimir Tarasenko would limited due to his injury history and salary cap hit.