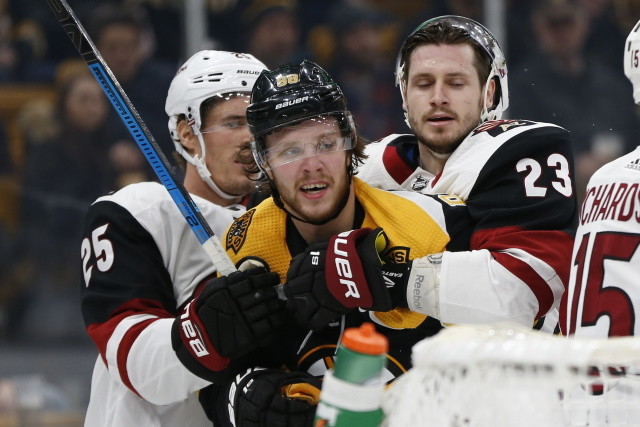 Jimmy Murphy of Boston Hockey NOW:  Again, the real question may be not Oliver Ekman-Larsson but perhaps Alex Goligoski. That may feature some internal debate in Boston. Don Sweeney accommodating Ekman-Larsson’s six years left on his deal at $8.2 million AAV is the big issue.

The reality becomes this. Boston and Sweeney expect to keep circling to find a defenseman. Is the one they let go the one they still needed?

“…We’ve still got three main pieces on the chessboard. Our goaltending has been spectacular since I got here. The guys are getting the job done really well,” Pittsburgh Penguins President of Hockey Operations Brian Burke concluded. “So, we’ve got to see if we can add to this group without forfeiting futures. People say — How do you do that? You have to make some trades probably. But we’ll see if we can do it. We’ll look at some free agents. We’ll have to make some tough decisions. Ownership gets that.”

So, Pittsburgh, their President Of Hockey Operations, and their general manager are on the same page. Pittsburgh remains concerned about making the playoffs but believes they can make a deep run if the Penguins get there. Ron Hextall expects to try and add toughness — maybe a defensive defenseman or agitating forward. The question is affordability and availability.

Can Mattias Ekholm be the defenseman for Philadelphia?

Dan Rosen of NHL.com (mailbag):  The name popped up recently but Mattias Ekholm whispers will grow louder as the April 12th trade deadline approaches. Chuck Fletcher needs an upgrade at defense since Matt Niskanen opted out. That much is abundant. Philadelphia is not the team defensively they were last season.

There are undoubted risks. Can Fletcher risk a half-season of Ekholm potentially for a deeper run? Can he then sign Ekholm longer-term? Can the general manager be content with standing pat? Mattias Ekholm will be sought after by many teams. The price will be higher but the opportunity here may be even greater.