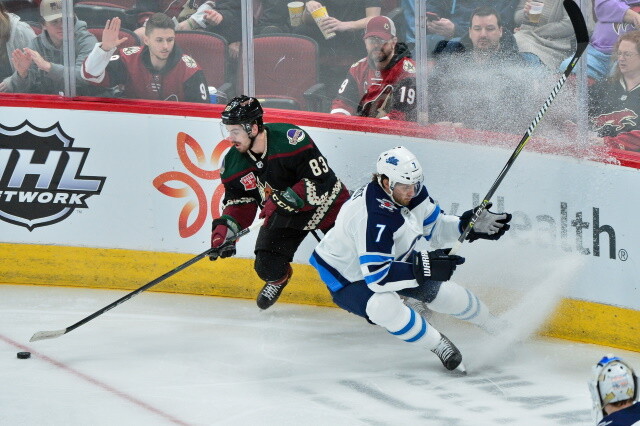 Joe Haggerty of Boston Hockey NOW:  A name that popped up recently was Conor Garland. Why? The Arizona Coyotes may be selling by the trade deadline. With a seven-day quarantine period becoming more likely, the market opens up some. However, Boston may have an interest if Kyle Palmieri falls through. Garland is a younger version that brings a different skillset.

The hometown connection rings true but what hits home is that Garland is an RFA this summer and UFA next summer. His cost will go up eventually but now it is under $800,000. Arizona, if in the slight chance they move him, will want a lot for a top-25 forward (this season anyway). Garland is also 100% after a nagging injury hampered him for the past few weeks.

Ken Wiebe of Sportsnet:  Winnipeg Jets general manager Kevin Cheveldayoff has three options but one does appear to be eliminated. Going with standing pat and letting the depth have a larger role feels unlikely.

Cheveldayoff acquired Paul Stastny in 2018 and Kevin Hayes in 2019. Now, to go big, cap room helps and Winnipeg only has $3.5 million in the LTIR pool. What does Winnipeg need most?

A top-4 defenseman remains at the head of priorities.  Mattias Ekholm may or may not be expendable in Nashville now they are back on the bubble. David Savard suddenly comes into focus then is in the same boat. Travis Hamonic may not get moved either from Vancouver for the same reason.

There are players like Josh Manson from the Anaheim Ducks. Manson can be had for a cheaper price and has one year on his deal. Rasmus Ristolainen name has been floated out there. Manson had an injury while Ristolainen suffered from COVID. His defense has been understandably even worse this season.

Cheveldayoff will have to move a first-rounder and an “untouchable” prospect to get a deal done for a bigger asset. Dylan Samberg and Sami Niku maybe two guys that could go back. Samberg nets the biggest return, however.

Finally, there is the NHL Expansion Draft but right now that matters little.