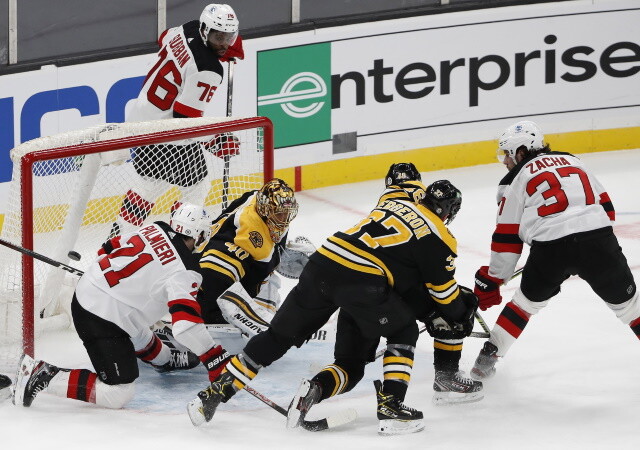 Bruins could use a left DMan, RWers and now a goalie?

Fluto Shinzawa of The Athletic: The Boston Bruins could use some help on left defense and at right wing. A look at some options that might fit for the Bruins.

Alexander Edler – Canucks – pending UFA – The Canucks could ask for a second- and third-round pick. (* article was written before the full extent of the Canucks breakout was known)

Mattias Ekholm – Predators – one-year left at $3.75 million – Asking price is believed to be a first, prospect and another asset.

Alex Goligoski – Coyotes – pending UFA – The Coyotes could ask for a second- and third-round pick.

Jon Merrill – Red Wings – pending UFA – Carries just a $925,000 so bidders may drive the price up to a first-round pick.

Riley Nash – Blue Jackets – pending UFA – May a fourth-round pick or a third if salary is retained.

Miles Wood – Devils – one-year left – Could cost a first and a top prospect.

Jimmy Murphy of Boston Hockey Now: The health of Boston Bruins goaltender Tuukka Rask is becoming a concern and there has been some speculation that GM Don Sweeney has been seeing what goaltenders could be available at the trade deadline.

“From what I’m told, there is considerable concern with Rask in Boston,” one of the sources told BHN Saturday. “They have Halak just for this situation and like what they’ve seen from Vladar but what if Halak goes down or isn’t doing what they expect from him. He’s had some issues and it can’t hurt to add more experience to that position for the playoffs.”

It’s believed Rask has missed basically the past month with a lower-back injury.

Adding some scoring upfront and a top-four defenseman are other areas of need for the Bruins ahead of the deadline if they want to make another run this year.