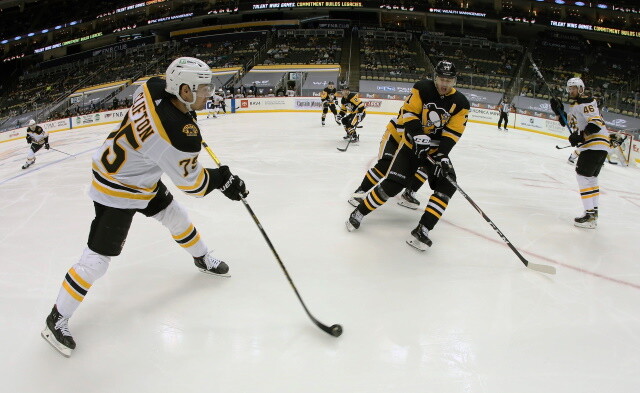 Boston Bruins and their trade targets

Joe Haggerty of Boston Hockey NOW (mailbag):  Boston needs offense in the worst way. Their one-dimensional approach failed miserably. The top line ranks still as one of the best in the league but they are 24th in scoring. With Boston implementing a lot of their farm into the team, assessing what they have in the next few weeks is essential.

Do they go after a goal scorer when there are not that many at the deadline — aside from Kyle Palmieri maybe? Players like Rickard Rakell, Taylor Hall, etc. have too much buyer beware attached to them.

Jake DeBrusk carries more value as a member of the Boston Bruins than not. Any trade involves getting a change of scenery value as opposed to what Boston truly needs.

Boston got lulled into falsehoods two years ago when they made that run to within a game of the Stanley Cup. Now, they have a shell of that team and little to make quick replacements. They are what they are. Boston will have to rely on small moves and hope for the best.

Pittsburgh Penguins and their trade targets

Dan Kingerski of Pittsburgh Hockey NOW:  Pittsburgh needs toughness and a bottom-six stopper. With Teddy Blueger out longer-term, that becomes more needed than ever. Now with Evgeni Malkin on the injured reserve, does Ron Hextall consider a more drastic trade? This depends on how long Malkin really is out for.

Right now Malkin is out retroactive till March 23rd. After that, there will be further questions. If Malkin recovers fast enough, then no problem. However, the longer this lingers closer to the trade deadline, the more problems that are caused.

As for those bottom-six forwards, Pittsburgh might target Detroit’s Luke Glendening for faceoff help and timely scoring. They could try to pry Bobby Ryan as well. Another interesting possibility is Erik Haula. Haula is grossly underestimated but needs to stay healthy. After that, Cody Eakin and even Ryan Dzingel could be considered because again they are cheap.

Meanwhile, everything else hinges on yes, Evgeni Malkin. The Pittsburgh Penguins may be more doomed than the Boston Bruins. Crazy but true.