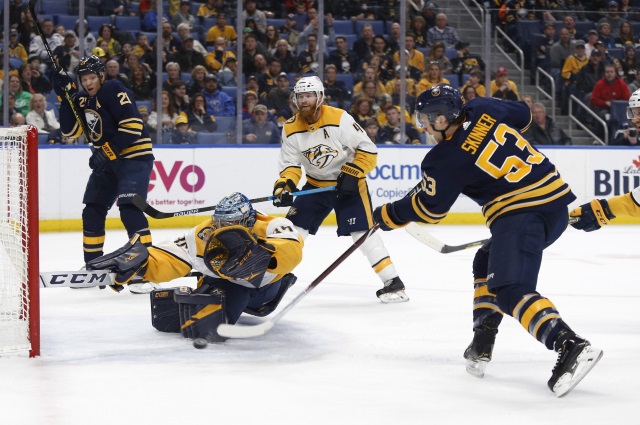 “We don’t measure players only on statistics. It’s part of the mix. It is just a bit of a gut feel that the best lineup for tonight was with Casey Mittelstadt in that spot. It’s less against Jeff than it is for what we think this group needs today.

“There will be underlying messages, of course, anytime somebody doesn’t play. But in the end, the decisions are for the team and for the group and for the chance to win. I just think it’s good for Jeff to take a look once from the outside.”

Joe Haggerty: Boston Bruins defenseman Jakub Zboril skated in a no-contact jersey at practice yesterday but could lose it for today’s practice.

Defenseman Kevan Miller should be ready to return on Thursday after having some time to rest his knees.

“Zboril skated. Grzelcyk skated early. If feels good in the morning he’ll practice with our group tomorrow with no restrictions,” said Bruce Cassidy. “Krejci did not skate, so he’s a little further away. Kevan Miller was out there, so that’s a good sign.

“Looking forward let’s see who gets through practice tomorrow, but obviously Miller and Zboril are trending better than the others.”

Galchenyuk will eventually get into the Leafs lineup

Kristen Shilton: Toronto Maple Leafs coach Sheldon Keefe on Alex Galchenyuk getting into the lineup: “We don’t want to rush and just put him in, we want to give him an opportunity to have success. There’s a lot of areas we’d like to see him improve upon and reconnect with in his skill set.”

Lundqvist back on the ice

Justin Tasch of the NY Post: Goaltender Henrik Lundqvist back on the ice.