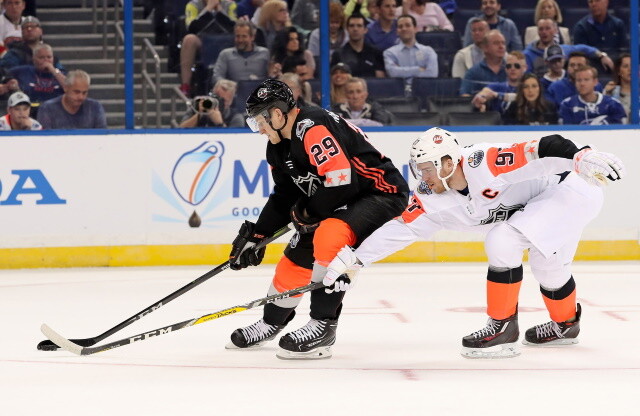 DeBoer and the Golden Knights off to the Conference Finals again

Greg Harvey: Franchises making it to the Conference Finals.

Kevin Kurz: This will be the fourth time in the past six seasons that head coach Pete DeBoer has made it to the Conference Finals.

“There may be surgery, there may not,” Cassidy said. “So that’ll be his decision and the medical staff’s decision.”

Rask said he will talk about his injury after their exit meeting in a couple of days.

Chip Alexander: Carolina Hurricanes forward Vincent Trocheck said that he had a sprained MCL and added that “nothing too serious.”

Columbus Blue Jackets: The Blue Jackets have named Brad Larsen to be their head coach. He’s been their assistant coach for the past seven seasons. He signed a three-year deal.

Haas back to Switzerland

Marincin off to the Czech League

Gord Miller: The tentative schedule for Countries to host the World Junior Championships.

Hart nominations are out.

1. Connor McDavid was next-level this year. The best offensively, the best on the powerplay, put up historic point totals… let’s not overthink this. #LetsGoOilers pic.twitter.com/Vtwzen4qiu

3. Nathan MacKinnon is always a pretty safe bet to be elite at any given moment, and he was the best player on a ridiculous Avs team. The only knock on him this year is that he didn’t score that much, especially at 5v5 where his 8 goals ranked 126th. #GoAvsGo pic.twitter.com/kORxlsSqbn