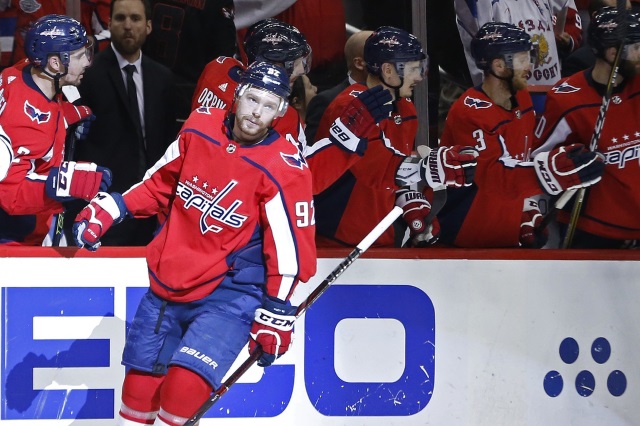 Joe Haggerty of Boston Hockey Now: Boston Bruins defenseman Matt Grzelcyk and forward Jake DeBrusk returned to practice and are expected to return to the lineup on Wednesday.

Forward Jack Studnicka practiced in a no-contact jersey. He’s been up out with an upper-body injury for the past four games.

Defenseman Charlie McAvoy left practice with a chipped tooth after a collision with Trent Frederic.

Michael Smith: Carolina Hurricanes coach Rod Brind’Amour on Vincent Trocheck‘s lower-body injury: “He thought he might be able to play, so I’m hoping it’s not too long.”

Coach Rick Bowness said that Alexander Radulov is day-to-day with a lower-body injury and will be out Tuesday night.

Mark Spector: The Edmonton Oilers have put forward Gaetan Haas on the IR and have activated forward Tyler Ennis.

Jason Gregor: Oilers forward Zack Kassian left last night’s game with an upper-body injury. There was no update on Kassian after the game.

Alex Daugherty: Hynes also said that forward Luke Kunin should be able to return to the lineup this week.

Shelly Anderson of Pittsburgh Hockey Now: Pittsburgh Penguins defenseman Mike Matheson left practice early after colliding with a teammate. Coach Mike Sullivan didn’t have an update after practice as he was still being evaluated.

Cap Friendly: The Vancouver Canucks have put forward Tyler Motte on the IR. Defenseman Travis Hamonic was moved from the IR to the LTIR. The Canucks LTI salary pool increased by $1.25 million.

Samantha Pell: Washington Capitals defenseman Justin Schultz practiced with the team for the first time since taking a puck to the face back on January 28th.

He wore a full face shield. He said that he is day-to-day. He lost some teeth and had a few small fractures.

Samantha Pell: Capitals Evgeny Kuznetsov practiced with the team for the first time since being added to the NHL’s COVID Protocol list back on January 20th. He said that he is feeling better now and that his heart had checked out okay.

“I’m just happy I’m alive today, and be able to practice with the team is just a big step for me.”

Stephen Whyno: Kuznetsov added: “It’s definitely not fun and it’s not easy days. Now I understand people who have symptoms or not symptoms, whatever. It’s just tough days, you know? But I’m feeling good now, and my heart is good, everything good, so I can practice hard.”