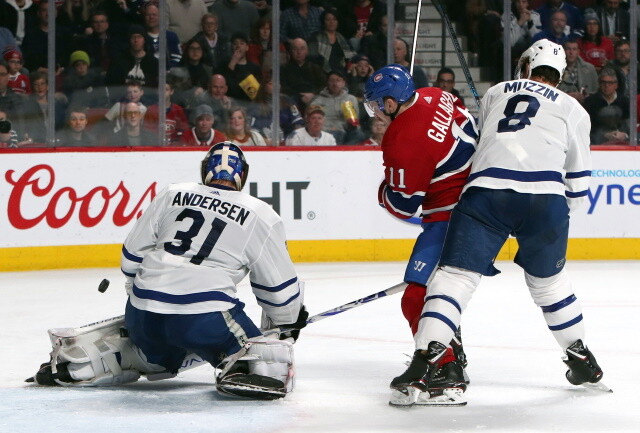 Craig Morgan: Arizona Coyotes coach Rick Tocchet said Tyler Pitlick is close to returning and could be in the lineup Friday or Sunday

Aaron Portzline: Columbus Blue Jackets coach John Tortorella said on 97.1 The Fan that forward Boone Jenner is out of the rest of the season with a broken finger.

Jenner was hit by a Patrik Laine shot Tuesday night.

Darren Dreger: Wild prospect Marco Rossi is getting closer to being able to do some light training after some recent tests. He is expected to be ready for training camp.

Montreal Canadiens: Foward Brendan Gallagher will be out for at least six weeks and has been put on the LTIR.

Mike Morreale: A New Jersey Devils spokesperson said that forward Nico Hischier could be ready to return to the lineup next week if he continues to make progress.

Forward Teddy Blueger skated again yesterday but is not cleared to play yet.

Defenseman John Marino was given a maintenance day and didn’t skate.

Pens Inside Scoop: Sullivan that Evgeni Malkin is progressing and skated for the first time. He’s missed the past 10 games with a lower-body injury.

Pens Inside Scoop: Sidney Crosby on Malkin back skating: “It’s huge. It’s a big step. Knowing how important he is to this team, and just the amount of guys that we’ve seen go out here lately, it’s always great when you hear that guys are progressing. It’s the same with Geno.”

Kristen Shilton: Toronto Maple Leafs coach Sheldon Keefe on goaltender Frederik Andersen: “No update. He had another follow up but I haven’t gotten the update yet.”

Keefe when asked if there is any concern that Andersen is done for the season: “No concern.”

Mark Masters: Andersen (lower-body) hasn’t been on the ice since March 19th.

Scott Billeck: Winnipeg Jets forward Blake Wheeler is not traveling with the team as he is in concussion protocol after taking an elbow from Brady Tkachuk to the head on Monday.