SASKATOON — A “significant portion” of travellers calling the government phone lines to book a quarantine hotel in Canada were doing so too far in advance, potentially tying up the lines for more urgent calls from getting through, the Public Health Agency of Canada said.

The busy phone lines over the weekend led to some people being disconnected after waiting for several hours to book a hotel room, as required under new federal rules for air travellers arriving in Canada.

In fact, out of the tens of thousands of calls made in the past several days, only 2,277 bookings were made, the PHAC said.

“A significant portion of the calls coming to the booking line are from people enquiring about booking hotel rooms in March and April,” PHAC senior spokesperson Tammy Jarbeau told CTVNews.ca via email on Tuesday.

She said only people with flights arriving in Canada within the next 48 hours should be calling the phone lines open from 8 a.m. to 11 p.m. every day of the week.

“Travellers should not be calling to reserve a government-authorized hotel because they plan to travel in the future,” Jarbeau said. 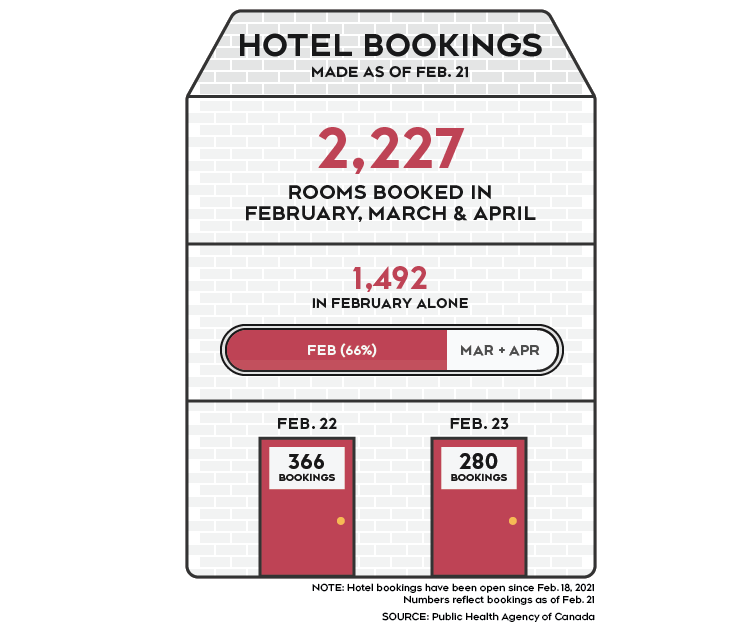 The Government of Canada now requires travellers to take a COVID-19 test once they arrive in Canada and spend the first three days of their quarantine at a supervised hotel while awaiting their results.

But since the hotel booking process opened last week, travellers and their families have been waiting up to nine hours trying to book rooms through a government-issued phone number, with many unable to get through at all. But Jarbeau said “call numbers have been decreasing each day since it began on February 19.”

She said the average wait time is now approximately two hours to connect with an agent. 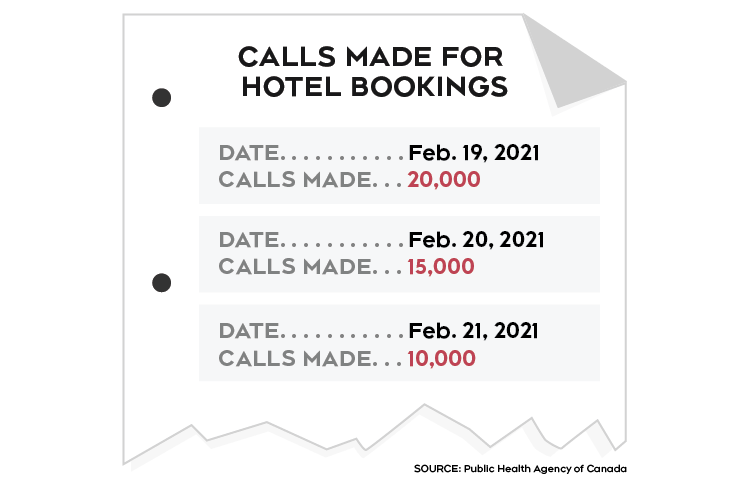 According to figures she provided, on the first full day the phones opened on Feb. 19, the phone lines were flooded with approximately 20,000 calls. The following day, there were 15,000 new calls and by Sunday there were 10,000.

The rest were for March and April.

When the government’s new quarantine policy came into effect on Monday, 366 bookings were made that day, with another 280 bookings made on Tuesday.